What are your concerns? 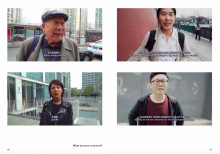 What are your concerns? is a new work that Muntadas developed in China through interviews with Beiging residents. A documentary, it reflects the concerns, the anxieties and emotions of citizens.

From March 2017 to August 2017 a series of streets interviews was carried on by a Chinese crew.

Different areas and neighbourhoods of the city of Beijing and people of diverse generations are addressed the question What are your concerns?, asking for a fast and short response.

It’s a new work Muntadas developed in China including interviews to Beijing residents. It’s a documentary film to screen by projection or in a plasma, with sound.

A video of interviews that strongly resembles CCTV. The whole video centers on one question: what are your concerns? The work collates the responses of dozens of Beijing residents, and these answers are edited together to form the second half of the video while all the question scenario is editing to the first part.

This is a piece of field research that seeks out people’s reflexes, like the reaction to an injection, or a mosquito bite. Like the previous works, it does not claim to present an exact statistical ranking of the populace’s concerns, but rather to probe their reactions, emotions, and anxieties in connection to the cultural, political, and socioeconomic realities surrounding them.