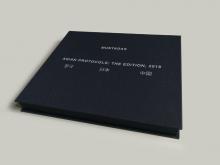 Private and public protocols organize and define society and our lives. They generate a set of regulations that exercise a sustained influence over our private as well as over our public behavior. Rituals, conventions, rules — protocols cover a variety of procedures and, in one way or another, they attempt to use, define, control or exercise power. Muntadas, 2006

Asian Protocols is an attempt to deal with images and codes as part of visual experiences, with contrasting approaches: more versus less, near versus far, etc. By sharing stories about China, Korean and Japan and tracing their different paths of development we get a glimpse of moments of agreement and of disagreement. The history of these countries shows these moments of understanding and conflict. How the cultural producers of the Western world (from painters to architects, from kitchens to gardens) have incorporated this imaginaire is revealed in the cultural products of the last two centuries. I myself am probably a product of these very circumstances, and I would like to learn and share these constructs through Asian Protocols. Muntadas, 2013