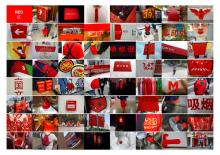 RED is a site-specific work consist of a big panel of 64 photographs showing the results of Muntadas' flow through the Shanghai streets and squares on a given day. That day was 01/10/2017. Coinciding with the China National Day that celebrates the anniversary of the formation of the People's Republic of China, Muntadas captures through his camera the drift of Shanghai's citizens and the pulse of the city, always around the red color as unequivocal symbol of contemporary China.

The work RED could be considered as a personal projection of Muntadas’ previous project «Asian Protocols». While in «Asian Protocols» Muntadas made use of experts and collaborators to try to delve into the similarities and differences of East Asia countries with regard to their political, social and cultural organization, and in their ways of life both in the public and in the private sphere, in this case Muntadas collects all that acquired knowledge and applies it taking to the streets in order to discover and verify, by himself as an artist, the idiosyncrasy and behavior of a particular town. In this case, in Shanghai during the China National Day — a singular date in which both administration and citizens celebrate it with signs of patriotic exaltation—, Muntadas is carried away by the course of the celebrations taking advantage of the drifts to capture and leave a personal and artistic record of that he perceives.